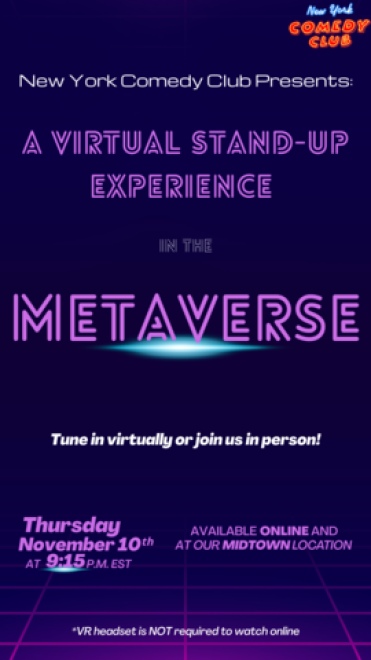 This stand-up comedy show takes place inside of New York Comedy Club in front of a live audience and is simultaneously streamed in our virtual club. Thanks to our metaverse platform partner, NOWHERE, our virtual club offers an interactive experience for up to 100 audience members that can tune in from anywhere in the world in addition to those watching in person. This has allowed comedians such as Rafi Bastos, Carly Aquilino, Akaash Singh, and Zarna Garg, to name a few, to reach their broad audiences and offer them the live stand-up experience they otherwise would not be able to enjoy. In our virtual club the audience members can move around freely, speak to others, and share laughter as if they are in a real comedy club. New York Comedy Club's Virtual Comedy Show expands the horizons in which stand-up comedy can be experienced.