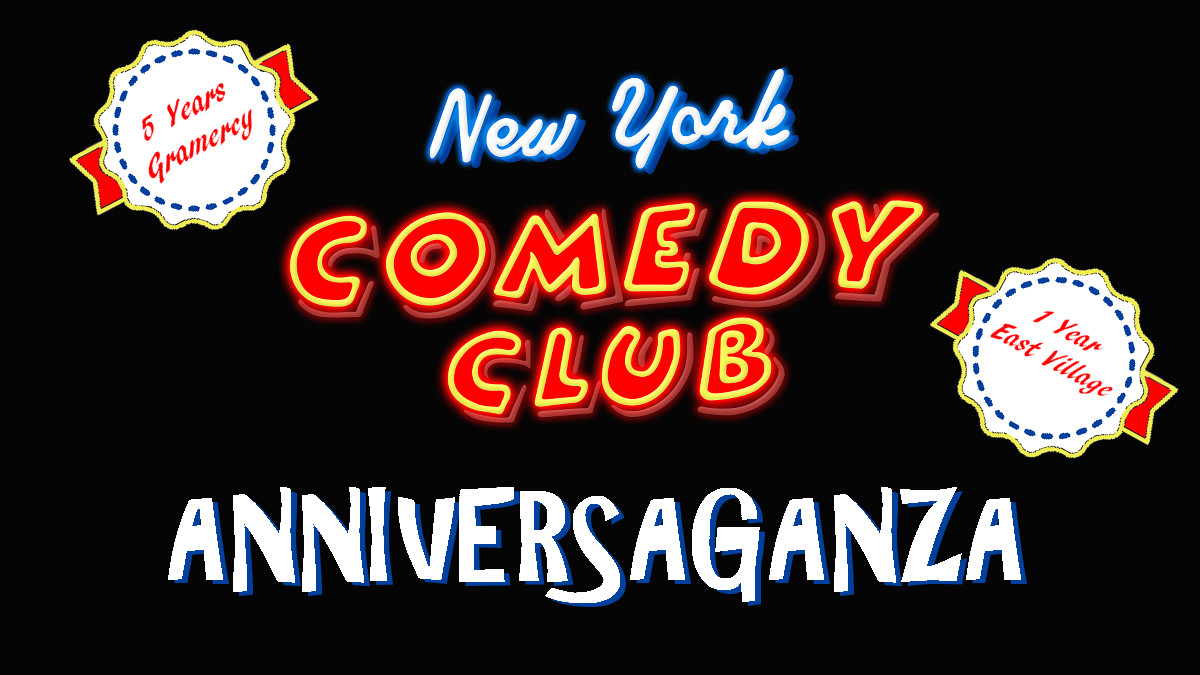 We’re celebrating five years of NYCC from July 31 - Aug 14, 2019.  Download the full schedule, or visit our online calendar and use code HAPPY for 2-for-1 tickets to most shows!

July 31 marks five years since Emilio Savone and Scott Lindner took ownership of the New York Comedy Club at 241 E 24th Street. But this was not the beginning for either the owners or the club.  New York Comedy Club had been serving comedy audiences for over two decades by 2014, while Lindner and Savone had been working together doing marketing and promotions for comedy and entertainment venues around the city for nearly ten years.  Meeting when Emilio chucked his corporate life to answer a help wanted ad for Scott’s a street team (the guys who sell comedy tickets in Time Square), Lindner and Savone quickly bonded over their shared manic work ethic.

Lindner left New York for a while to complete his education in audio engineering in California and when the pair were reunited they created Empire Tonight, a guerilla marketing team that promoted everything from The Comic Strip to a bar where you can ride a mechanical bull.  But they felt the pull of comedy and began producing their own shows, in addition to promoting the club as a whole. When the team moved on to New York Comedy Club, they set down major roots - not only filling up the room of this quiet club located in a residential area, but taking over major components of the programming. When owner Al Martin shifted his focus to his two other clubs in more desirable locations, the pair jumped at the chance to take full control and Martin handed over the keys to the truly dynamic duo.

Since then, the pair have made two major renovations, along with a number of smaller facelifts and Lindner has rewired the sound system for both the best possible live experience and for some incredibly engineered albums. The pair took it slow and built on each successive success, with only one show a night many nights throughout the first year.  Knowing their own past as producers, they tapped a number of comedians and promoters to produce shows at the venue, including Michael Brigante’s Back Room Comedy, Santi Espinosa’s ItMatters Comedy Night and Matt & Matt’s Laundromat produced by Matt Pavich and Matt Richards. They also looked to younger comics to help build a community, offering numerous opportunities for development spots alongside heavy hitters like Yannis Pappas, Damien Lemon, Des Bishop, Chuck Nice and Ricky Velez. They even instituted “Late Night” - a time after the checks drop on the last show when younger comics get to do rapid fire sets for as long as the audience wants to stay.

In 2017, the pair branched out from the City with local partners Joe Gerics in Fairfield, CT and Rus Gutin in Philadelphia, which quickly led to a new room in Atlantic City.  As 2018 approached, the team was looking to expand within the city as well, when serendipity struck and the former site of Eastville Comedy Club became available. A few months and a major facelift later, New York Comedy Club on 4th Street opened its doors on August 14, 2018 - just two weeks after NYCC Gramercy celebrated its 4th Anniversary!

To mark the dual occasion, we’ll be holding two weeks of celebratory shows, events and parties, including:
We Are The Champions - Wednesday July 31 - Their first credit was winning NYCC’s annual fall competition, now they’re making waves around the country!
Chuck Nice’s Young Lions of Comedy - Thursday August 1 - Veteran Comedian Chuck Nice hand picked this lineup of hot up-and-comers.
Number One Hits - Sunday August 4 - A collection of just a few of the amazing folks who have recorded albums at NYCC that hit #1 on iTunes charts.
The Blue Show with Aaron Berg, The No Mic Show with Alex Pavone, plus special shows featuring Andrew Schulz, Ricky Velez and Nore Davis.

Download the full schedule, or visit our online calendar and use code HAPPY for 2-for-1 tickets to most shows!