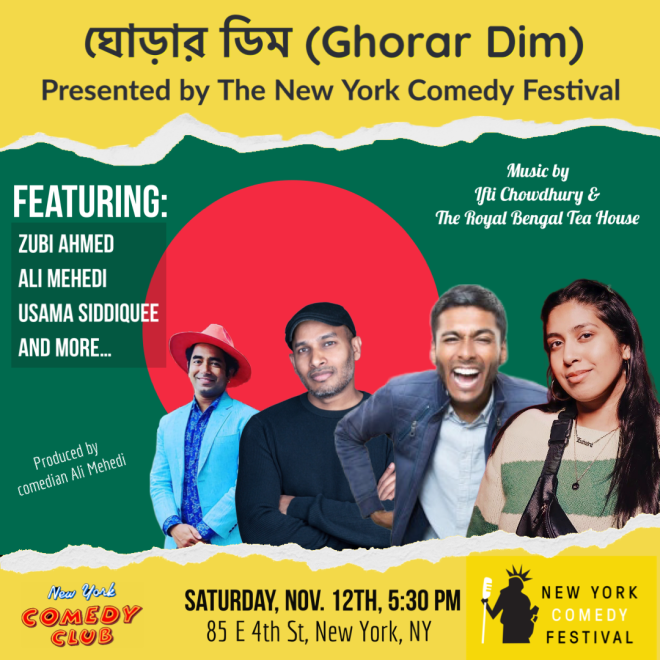 Ghorar Dim (ঘোড়ার ডিম), a hilarious stand-up comedy show featuring some of the funniest Bangladeshi-American standup comedians - yes! there is more than one! The lineup includes amazing comedians who perform all over U.S. and internationally. The show also features Traditional Bangla music by Royal Bengal Tea House! Note that the comedy show will be in English and Music will be a combination of Bangla and English.

Seating is limited, so get your tickets now!

There will also be an after party at (TBD). We encourage everyone to wear traditional Bangladeshi clothing and join the after-party! Join us to mingle, talk about art, culture, music, comedy, and all things Bangladeshi!

Zubi Ahmed: Bengali-American Muslim writer, comedian, and filmmaker. Zubi is one of the hosts of Kutti Gang, a live comedy show featuring South Asian performers. She is the writer and director of Polterheist, a comedy web-series about a guy and a gay ghost which has been featured in the South Asian Film Festival of America and NY Lift-Off Film Fest. You can also catch her talking to other brown talents and community organizers on her baby talk show, Late Afternoon with Zubaira, available to watch on Youtube. You can find more detail about her here.

Ali Mehedi: New York based Standup Comedian, Writer and Actor. Ali was featured in the FunnYmmigrants Comedy Festival. He was one of the semi-finalists in the StandUp NBC nationwide search for comedian in NYC and won the 2019 Boston Satellite for the World Series of Comedy. Ali is also the producers of ঘোড়ার ডিম (Ghorar Dim) show, along with The Young and the Awkward at the Comedy Bar, The Week-End Show open-mic and “Joke Workshop with Ali Mehedi”, and Laughing Lassi Comedy show. Ali recently did his one-man show called "Made in Bangladesh". You can find more detail here.

Usama Siddiquee (formerly known by his stage name “Usama Bin Laughin”) is a Bengali-American stand-up comedian and actor based in New York. Usama most recently was featured on the 2020 season of America’s Got Talent. He traveled to Montreal as one of the New Faces at Just For Laughs in 2018. Shortly after he was passed at the world famous Comedy Cellar in New York. He made his standup television debut on BET's 50 Central. He has been featured on Showtime’s Desus and Mero, MTV’s News, and Bravo’s Cash Cab. He was a finalist for the 2017 NY's Funniest Competition at Caroline's; a finalist in the 2017 NBC Standup Competition; 1st place winner of the 2016 Laughing Devil Cup Comedy Festival in New York; the 1st place winner of the 2015 Yonkers Comedy Festival as well as the 1st place winner of the 2015 Make Me Laugh Albany Comedy Festival. Usama has also featured on videos for NBC, Buzzfeed, Refinery29, The Scene, Mic.com, FusionTV, and Huffington Post. And, He is an amazing beatboxer! You can find more detail about Usama's up-coming shows here.

Royal Bengal Tea House is a community organization that brings people together from various backgrounds. They break down social boundaries with collaborative music, art, film, poetry and activism. Musicians from Royal Bengal Tea House will be performing Bangladeshi songs to close the show!